How the University of Wyoming is changing the commodity’s narrative.

The state of Wyoming is a significant energy producer with its Powder River Basin (PRB) providing more than 40% of the coal produced in the United States. In 2021, the Wyoming coal industry mined roughly 239 million short tons of coal, which was shipped to power plants in 29 states and used in 113 coal-fired electricity generation units.

In 2008, coal production out of the Powder River Basin peaked at 496 million short tons. Since then, there has been a decline in coal production, mainly attributed to fuel switching to cost-competitive natural gas.

Coal can be a great resource for the energy industry – it is abundant, relatively inexpensive and, when burned, is an excellent source of energy. As a unique geologic material, it has a high carbon content and includes seams in the subsurface, which are laterally extensive, meaning the seams can trap and retain metals like rare earth elements. When coal is burned, the carbon is oxidized into carbon dioxide.

Although CO2 emissions can negatively impact the environment, they can also be captured and stored permanently underground to create net-zero electricity generation. At the University of Wyoming School of Energy Resources (SER), researchers focus on these unique attributes of coal to develop non-thermal uses and to develop sustainable carbon management practices. 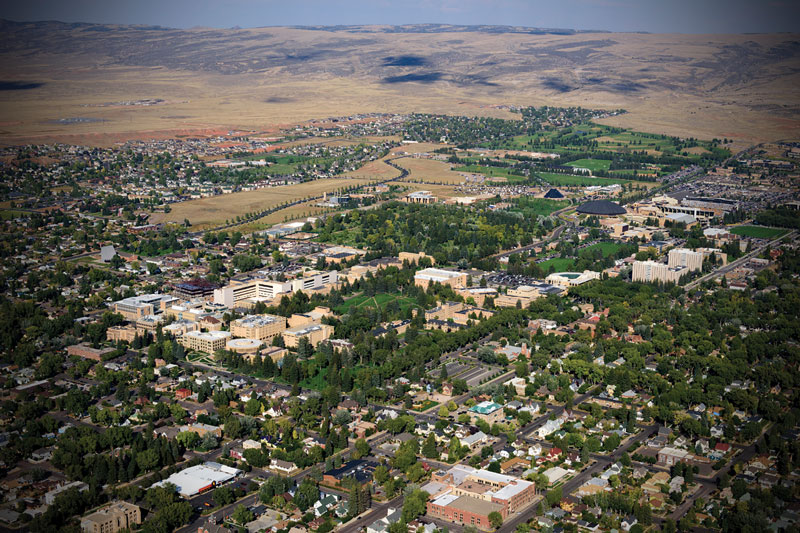 Carbon Engineering Initiative
The Carbon Engineering Initiative (CEI), led by SER, began in 2016 with a mission to develop a carbon-based manufacturing industry in Wyoming and diversify its coal-based economy. The initiative has received approximately $30 million in funding from the Wyoming legislature since its inception, which helped develop a coal refinery designed specifically for PRB coal.

With minimal waste and a low-carbon footprint, the refinery combines three proven technology platforms – solvent extraction, pyrolysis and gas conversion – to develop a series of carbon-based products, high-value chemical compounds and petrochemical feedstock. Substantial progress has been made to develop carbon-based products, including coal-derived construction materials, soil amendments, and paving and asphalt.

There are a few coal-based products close to commercialization being developed from the pyrolysis process. Coal char is a byproduct of the fast pyrolysis process that consists of rapidly subjecting coal to extremely high temperatures for very short periods in an inert or hydrogen rich environment. The process produces liquids and ultra-high purity coal chars that are highly porous and entirely safe for the environment. This byproduct is the basis for the coal-derived construction materials and soil amendments.

They are chemically cured as opposed to using high-temperature kilns and have been classified as “Class A” in an ASTM E 84 test – the standard test method for surface burning characteristics of building materials – meaning it has superior fire protection. The bricks are produced using a zero-waste construction method, which can be manufactured, transformed and recycled in a complete life cycle, minimizing residual materials.

The research team has successfully moved the bricks out of the lab for demonstration. Recently, the team broke ground on two demonstration houses: one made of coal char bricks and one made of conventional bricks. This will allow the research team to measure the performance of the coal char bricks and compare that performance to the conventional materials. The team will be collecting data to measure thermal conductivity, toxicity, weathering, air quality and sound.

In addition to the coal char bricks, many other construction materials are in various stages of development and will be moved to the field soon for testing.

The research team is investigating the coal-derived soil amendments and comparing its effects to conventional Wyoming agricultural practices, such as the use of more expensive biochar, to determine its viability as an agricultural product. Greenhouse experiments have shown favorable results for the coal char-based soil amendments after testing many different soil types and conditions.

These products have now moved into the field for more extensive field studies, which include coal char amendments on sugar beet crops at the UW Research and Extension Center in Powell, Wyo., and on-field corn and alfalfa crops at the Sustainable Agriculture Research and Extension Center in Lingle, Wyo. Crop growth on the treated plots were monitored and data was collected once crops were harvested in the fall of 2021. Preliminary results show that coal-char soil amendments could be a less expensive alternative to biochar and perform equally and, in some cases, better than biochar. More studies are planned for the upcoming growing season.

Coal-derived Rare Earth Element Initiative
Rare earth elements (REEs) are vital for the production of clean energy technologies, electronics and magnets needed for electric vehicles and wind turbines. REEs are a relatively abundant group of elements composed of scandium, yttrium and the lanthanides series. While the list includes 17 elements, the most sought-after are neodymium, europium, terbium, dysprosium and yttrium. Recently, serious supply chain concerns have arisen because these elements are mined, processed and manufactured in countries like China.

Although many REEs are mined and processed overseas today, that does not mean the U.S. does not have domestic resources. In fact, it turns out that Wyoming’s coal seams contain predictable concentrations of REEs, including those that are the highest value. Researchers at the SER are analyzing every aspect of the REE supply chain to determine how best to stand up a coal-derived REE industry in Wyoming.

REEs are generally located and deposited in three different parts of the seam. The first is within the coal seams – these REEs are mined and combusted with coal and thus end up in the fly-ash, a by-product of coal combustion.

Coal fly ash has long been recognized as a prospective resource for REEs. PRB coals constitute the most significant percentage of current U.S. coal ash stocks. They are conducive to high recovery and low-energy REE extraction due to the higher calcium concentrations found in the coal. SER researchers have teamed with the National Energy Technology Laboratory to build and test a coal-ash REE extraction pilot facility near Gillette, Wyo. The pilot is anticipated to be commissioned in early 2023.

The second part of the coal seam known to house REEs is in volcanic ash beds. These ash beds are called tonsteins and were deposited as volcanic ash fell into peat swamps when the organic matter (the precursor of coal) was deposited. These ash beds are laterally continuous throughout coal seams and are geochemically distinct. The tonsteins have particular REE elements compared to those found elsewhere within the coal seams.

The third and highest concentration of REEs in coal seams lies in the geologic material directly above and below the seam. It is often referred to as the transition zone because it is the transition between the coal and non-coal strata. These sediments are generally reactive clays that absorb REEs as groundwater flows through rock.

The coal seam creates a reduced environment that rapidly changes the oxidation state of the groundwater, which is favorable for REE accumulation. More work needs to be done on the solubility mobility and accumulation of REEs.

The PRB coal seams have many beneficial attributes that could support a viable REE industry, including:

Carbon Management Initiative
The last area that SER focuses on to change the coal narrative is carbon management. SER researchers are actively working to commercialize and deploy carbon capture and storage technologies. This work is largely being conducted through the Department of Energy-funded CarbonSAFE program. The program is aimed at developing a commercial carbon storage complex that has the capacity to store at least 50 million tons of CO2 over a 30-year project duration.

The project is collocated with Basin Electric Cooperative Dry Fork Station (DFS), which is recognized as one of the operation’s newest and cleanest coal-fired power plants. Attached to DFS is the Wyoming Integrated Test Center (ITC), a research facility used to test carbon capture and carbon conversion technologies on diverted flue gas from DFS. Currently, at the ITC, a membrane-based CO2 capture technology is being constructed and piloted. The Wyoming CarbonSAFE project is the CO2 storage component of the project. To date, the team has drilled two research wells that meet Class VI injection standards, installed an external monitoring network and collected a 3D seismic survey. Class VI wells are permitted through the Underground Injection and Control program to inject carbon dioxide for permanent geologic storage. They require rigorous geologic site characterization before approval is given to inject.

The goal of the Wyoming CarbonSAFE project is to create a project of first impression that demonstrates transferable technology for large-scale carbon capture and storage deployment.

About SER: The School of Energy Resources at the University of Wyoming is dedicated to energy-driven economic development for the state of Wyoming. Created in 2006, SER enhances the university’s energy-related education, research and outreach. SER directs and integrates cutting-edge energy research and academic programs at UW and bridges academics and industry through targeted outreach programs. The research projects summarized within this article are led and advanced by the innovative faculty and staff at the University of Wyoming SER, College of Agriculture and Department of Civil and Architecture Engineering.