U.S-based labor and law firm Fisher Phillips has released what is considered a first in technology for the nation’s industry: the MSHA Safety Tracker.

Powered by Microsoft Power BI and leveraging a comprehensive dataset of violations reported by the U.S. Department of Labor, the tracker – known more formally as the Mine Safety and Health Administration Violations Tracker – can provide employers with detailed access to the latest in mine safety violations.

Fisher Phillips officials said that it’s mine safety and health team worked alongside its knowledge management and technology staff to create the first-of-its-kind tracker to share a wealth of data on MSHA enforcement actions based on location and mine type.

By maneuvering around the map and accompanying data lists, users can also dive deeper to examine information about negligence levels, types of violations, and the most cited standards for mines across the country.

“The MSHA tracker provides a user-friendly safety snapshot of the mining industry as a baseline for employers to identify potential risks in their own operations,” said Mine Safety and Health Practice partner Chris Peterson.

Fellow mine safety partner Arthur Wolfson added: “It is our hope that the tracker will support the wellbeing of the industry and will serve as a useful tool to help operators recognize and mitigate some of the most common safety concerns around the country. 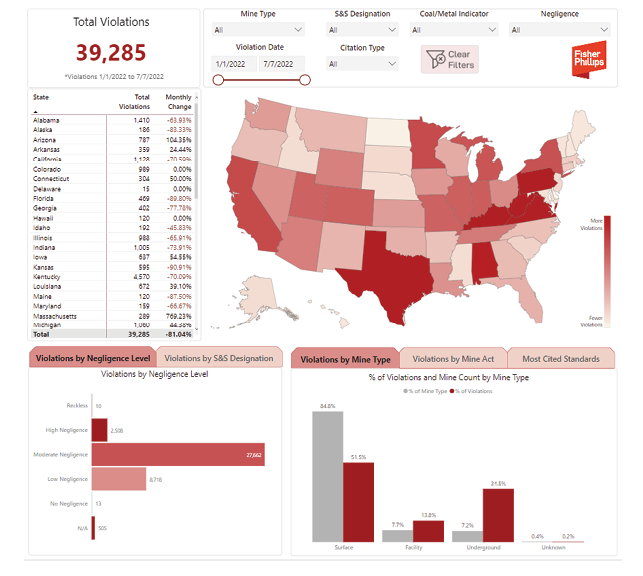 An initial analysis of data taken through June 30 by the tracker revealed some interesting metrics, the firm noted. For example, of all U.S. states, the top 10 for violations through that date included:

In addition, the most common designation for violations is the “moderate” level of negligence, with seven out of 10 violations receiving that designation. Also, 20% of MSHA violations have been designated as significant and substantial, or S&S.

“The most cited standard for underground coal operations is 75.400, which requires coal dust to be cleaned up and not to accumulate in active workings, or on diesel-powered and electric equipment.”

Meanwhile, for Metal and Nonmetal facilities, both facility and underground operations are most likely to face citations for housekeeping violations under 56.20003(a), and for those who operate surface metal and nonmetal facilities, the most common citation is 56.14107(a), requiring employers to guard employees from moving machine parts like gears, sprockets, chains and similar moving parts.

The company additionally found that surface mines account for half (50.7%) of all violations, per the data it took through June 30, and despite only making up 7.5% of all mines in the country, underground facilities accounted for 35.3% of all violations.