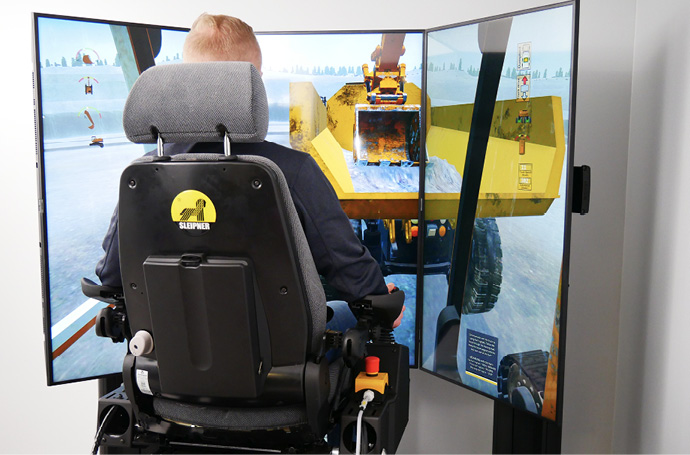 Sleipner Finland has launched two new simulators for its excavator transport systems, which the company said can improve safety and reduce training costs by up to two-thirds.

Expanding its line of E-series products, Sleipner has launched both portable and static simulators to train excavator operators at mine and quarry sites. Operators can be trained on the new E-series products, or they can be retrained to maintain a certain quality level for operating the E-series; both create the possibility for completely remote training.

Sleipner said it has wrapped up testing at two mines in Finland with around 20 operators with positive feedback, including at the Boliden Kevitsa mine.

“Many of the attendees had variable working experience with excavators. The new simulator saved our customer almost two full days of valuable production time. Also, I noticed that both experienced older operators and younger ‘PlayStation generation’ operators were able to learn on the simulator very quickly,” said Teijo Höylä, product manager at Sleipner.

Höylä said simulator training with its units can cut costs by 66% compared to traditional on-site training by saving fuel, maintenance and resources from productive work. During its testing work, mine supervisors reported happiness that the machines were not being taken out of production – and minimize absence for trainees.

“There was not a classroom of operators waiting for their turn on the simulator, so they could return to their work until their turn,” added Karl Marlow, training and product support manager, adding that five to 10 could be trained at once.

“Also, the level of operating skills required can be zero, meaning untrained operators spend more time on the simulator rather than posing a risk in the mine or pit. The one simulator can cover both small excavators and larger ones. Also, all the tasks we cover in theory and practice can be done on the simulator,” Marlow said.