The Mine Safety and Health Administration has released a safety notice for the nation’s mining operations relating to development mining near wells, an issue it says is happening thousands of times across the U.S. 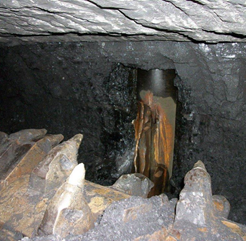 In the new notice, the agency points out that much has changes for both the mining and gas industries in recent years: “Today’s coal mines are deeper, and the proliferation of high-pressure Marcellus and Utica gas wells has increased the potential consequences of an incident,” it said.

“New scientific information is now available, most notably downhole gas well surveys that show that depth has a big effect on the possible deviation between a well’s surface location and its location at the coal seam level.”

This can, of course, pose a hazard to miners, especially when a mine inadvertently intersects an active gas well, as methane gas can inundate the mining section. Other potential interactions are with abandoned wells in depleted oil and gas reservoirs, which can pose similar hazards because they may recharge with gas over time, and with flooded and abandoned wells, which can cause injuries by forcibly ejecting material into the mine or by inundating the mining sections with water.

MSHA reports that it, along with state regulatory agencies, evaluate approximately 1,000 requests to mine within 150 feet of oil and gas wells each year. The primary technical document addressing interactions between gas wells and mining in the United States has historically been the Pennsylvania Joint Oil and Gas Well Gas Well Pillar Study – which was published in 1957.

In its key best practices, the agency said that the setback distance from a well should be large enough to mitigate risks associated with the cumulative impact of four factors: well deviation; surveying error; mining error; and pillar rib weathering and peak stress avoidance setback.