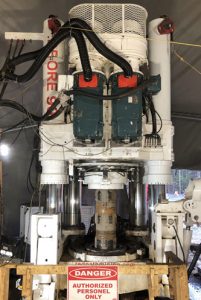 Redpath Raiseboring has achieved another record-breaking hole, this one the longest raisebore hole ever accomplished in the Northern Hemisphere and in all of the Americas.

The achievement was recorded in late May at Kirkland Lake Gold’s Macassa mine in Ontario, Canada.

“This concludes the first of the planned twin, 12-foot diameter ventilation raises extending from surface down to 5617 Level,” Redpath Raiseboring said, adding that the hole was accomplished in two stages with two machines drilling concurrently – a Redbore 70 underground and a Redbore 90EX on the surface.

Redpath said the Redbore raisebore machines were designed and manufactured by the company in North Bay, Canada.

The record came just three months after it met another milestone, this one at the Niobec mine in Québec, Canada. That raise was the largest ever completed in the Americas and the Northern Hemisphere, and the third biggest globally.

“Like with our Niobec project, the Macassa record is the result of an outstanding team effort that started in 2019. Months of preparation went into engineering design, procurement and preparation of the equipment,” Redpath Raiseboring General Manager Johan Davel said.

“Throughout the project, the operational execution, technical support and project management and controls were exceptional. We’ve established a strong partnership with Kirkland Lake Gold’s project team and the support they’ve provided throughout the project has been tremendous. Most importantly, this important milestone was completed without any lost time injuries or major incidents.”

Kirkland Lake Gold’s Macassa and its Detour Lake mines are both located in northern Ontario. The miner also owns the Fosterville operation in Victoria, Australia.