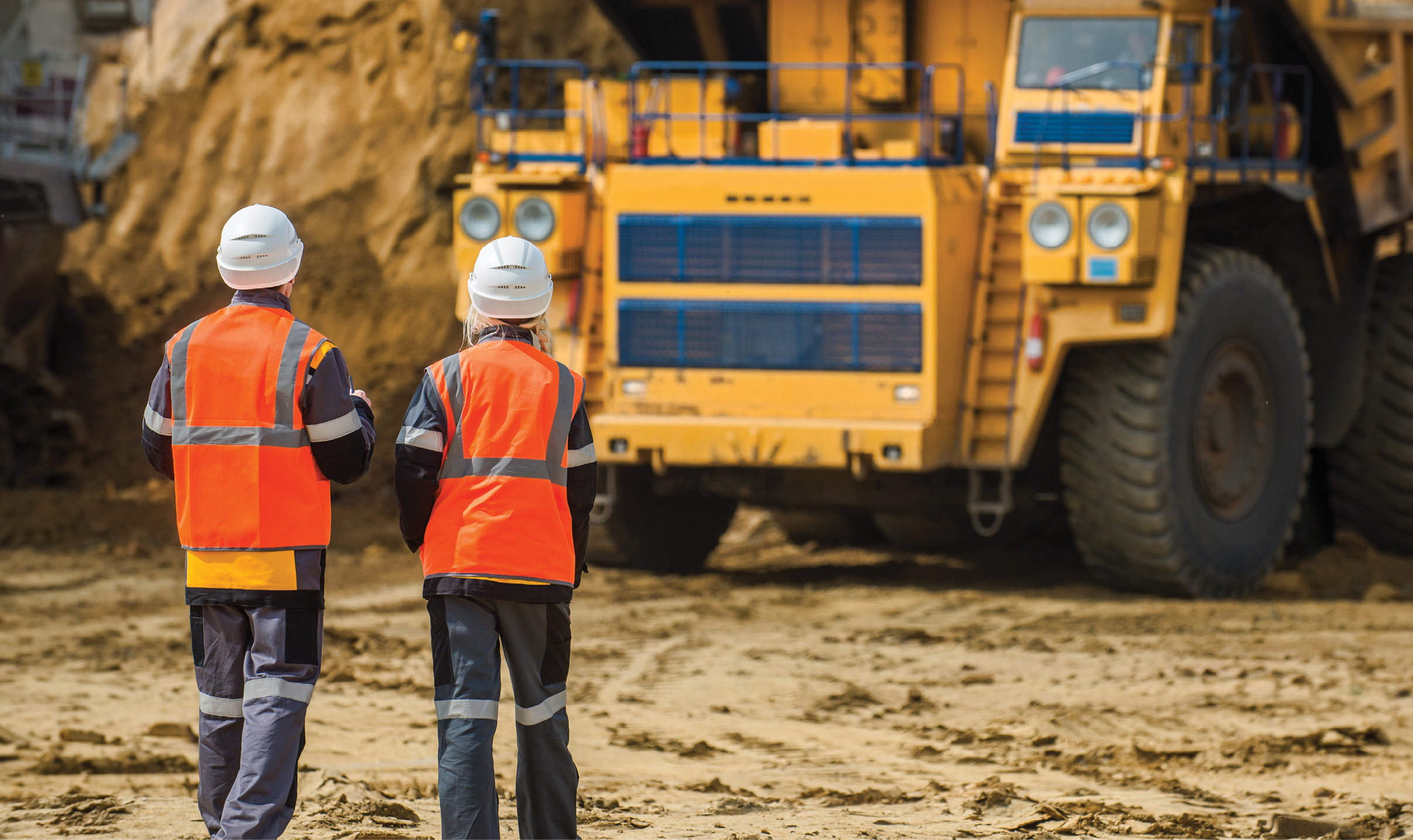 Author Mark Bowater talks with North American Mining about his first-ever book, Crimes Against Mine Planning, and the industry’s biggest pitfalls.

The challenges of mine planning can make the overall process feel like a never-ending uphill battle – but not so much when you know the potential pitfalls and how to rectify the issues. We can now know a little more about that thanks to Australian author Mark Bowater, who in January released his inaugural book, Crimes Against Mine Planning.

Bowater, a mining engineer with 33 years of experience in open-cut operations in coal and iron ore, has focused his skill on planning as well as scheduling – which he calls his professional passion.

“About 18 months ago I decided I was sick of the mining industry meeting the definition of insanity; in my 30 years in mine planning we have continued to do the same things but expect different results,” he said of his reasoning for writing the book, available now for free in PDF format or in print on Amazon.

He began his work writing articles for the social platform LinkedIn, gaining a following as well as great, motivating positive feedback. He decided that, if he was serious about making a difference in the industry, he needed to write a book.

“There were two primary facets behind writing the book, that is starting conversations around mine planning on a global basis, and the second was to give my voice a greater weight, so that when I challenged some of the crimes within mine planning, such as deterministic scheduling, that I might be listened to,” Bowater said. 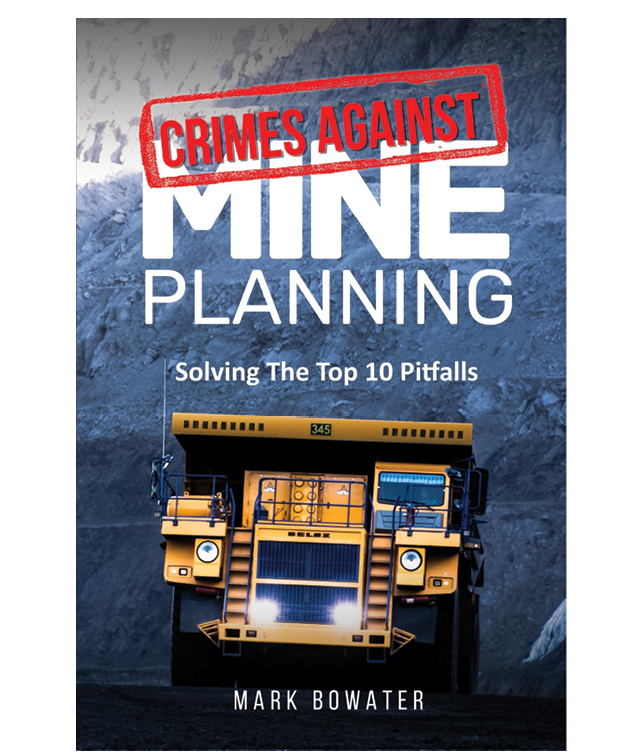 What was the readership you envisioned for this book?

I wrote the book generically for any stakeholder of mine planning and set out to ensure it could be understood by anyone who knows anything about mining. Feedback so far has been that, through the use of very simple examples and lots of stories, I have achieved that.

I always knew the book would resonate with mine planners. Feedback from the many directly involved in mine planning is that they only had to read the chapter names and they knew exactly what I was talking about and were in complete agreeance with my writings.

Ultimately, it is the managerial and executive level (mine general manager and above) that I really want to read this book and take some learnings away. It is at those organizational levels where the real change needs to start.

One surprising thing is the number of readers from professions who work with mine planners and have some interest in mine planning, such as geologists, surveyors and geotechnical engineers.

Can you elaborate on what’s included?

I talk about the 10 greatest “crimes” I have observed in my 30 years in the Australian mining industry. By crimes, I mean the things we do wrong to ensure that we aren’t producing or executing high quality plans.

There are 100 of them out there, and every mine site is different, but I wanted to start the ball rolling on discussion around mine planning issues, so chose my top 10.

While it is written around open-cut mining and the Australian industry, plenty of readers so far said the issues are the same in their country, and in underground mining as well. Mine planning crimes such as using optimistic input assumptions and not considering variability are universal, regardless of mine type or location.

The book doesn’t just highlight problems; I’ve always been a believer of the mantra “don’t just bring me problems, give me solutions as well”. So, for each of the crimes I also include discussion on a list of possible solutions that might advance mine planning.

Can you talk about the topical areas that are inside?

The crimes cover areas such as not knowing how to execute a plan, not having the right KPIs in place to measure quality, not incorporating Theory of Constraints into planning, planning at the wrong level of detail, not planning the enablers of production activities, “bullshit in equals bullshit out” and what to do with rogue production personnel who don’t want to follow the plan.

By far, the greatest crimes (I believe) that are inherent in the mining industry are a continued unwavering belief in deterministic scheduling rather than probabilistic scheduling, and the growing usage of overly optimistic planning assumptions – both of these lead to impossible-to-achieve mine plans.

The crime of continuing to carry out deterministic scheduling is one that is very topical at the moment, and there is a groundswell toward change. There are software developments happening in this space and I know of at least two major mining companies who are developing their own solutions rather than waiting for mining software providers.

What are some elements of the book you think would surprise readers?

I think there are two elements in the book that many readers would find surprising. First, I show in the chapter on task dependencies that it is actually impossible to achieve the deterministic mine plans that we produce. The variability that exists in real life within mining means that and gains in time are going to be lost throughout the schedule, while time losses will be carried through and accumulate. If we understand and work with this we can minimize those losses, but we can never totally eradicate them.

Second, the more I think about the crimes and discuss with others in the industry, the more apparent it becomes that the majority of the solutions depend on the industry changing our mindset. To fix our problem, we first have to acknowledge that we have one! For example, we’ve had probabilistic planning capability for over 20 years, we just have to make the choice to switch. Or we can choose not to use our mine plans for driving performance improvements by building optimistic assumptions into our plans, we could instead choose to use benchmarking for that process and instead produce mine plans that are realistic and lead to the right decisions.

If readers can take one thing from it, what do you want that to be?

That mine planning, which seems like an exact science to many and has an incredible amount of work behind each plan, is not as exact as it appears. Mine plans are a mythical art to many, and if you don’t have experience in creating them through spending time as a mine planner, they can be very confusing and baffling.

We need to appreciate the failings of mine plans and that they’re not correct, the high level of variability in mining means, at best, they are only ever a guide and should be treated as such. We can’t target and expect 100% compliance to plan; it’s an impossible dream.

While mine plans are providers of valuable information for stakeholders, ultimately their purpose is to ensure that we make the right decisions and I see far too many examples of wrong plans leading to wrong decisions, which costs the industry dearly.

I’m an engineer; give me a spreadsheet any time as I hate writing. So, I’d like to hope the answer is “no”, but due to the overwhelming interest I think it is inevitable at some point that I will add further books to the library. They will still be mining engineering related and I suspect the next one could be a book on the basics of mine planning to help