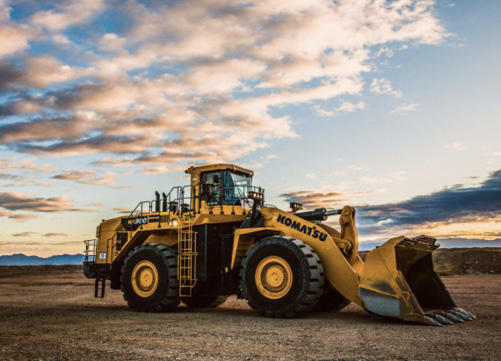 Komatsu is touting the benefits of easier operation, lower cost, higher productivity and improved efficiency in the introduction of its newest mining loader, the WA900-8R.

Announced in July, the new machine has the OEM’s SmartLoader Logic technology on-board to provide optimised torque for every duty cycle stage. According to National Product Manager Mark Summerville, the feature boost fuel economy by up to 10% versus its previous model.

The loader, which replaces the WA900-3EO, also includes a KomVision obstacle detection system, which utilizes radar and 360-degree cameras to alert and prompt operators to react if a person, vehicle or obstacle is detected.

Other productivity and economy features include a tyre slip control system and increased boom speed and breakout force and the addition of a modulation clutch for controlling speed and torque.

Komatsu noted the loader’s hydraulics have been designed around its closed-centre load sensing system (CLSS) technology.

“This uses a variable displacement piston pump combined with CLSS to deliver hydraulic flow exactly when the task requires it, preventing wasted hydraulic flow, which further contributes to better fuel economy,” Summerville added, noting the loader – in addition to having its latest-generation cab for improved safety and comfort – also has a trainer seat, shockless stop cylinders and climate control.

In related news, the OEM announced the new Joy HRX 1000 hard rock sizer recently to combat the issue many traditional sizers struggle with – crushing abrasive, sticky materials without clogging. The new release, it said, can offer a user versatility and can advance where sizers can be applied successfully.